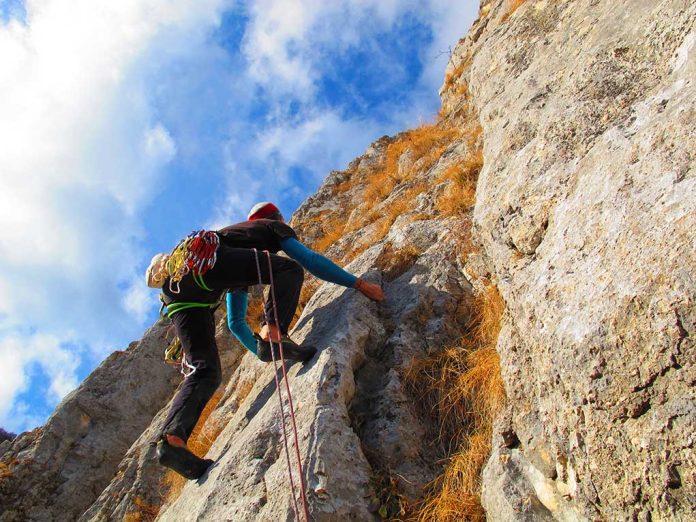 (TacticalNews.com) – For most people, being stuck between a rock and a hard place is simply an expression of speech. They’ll likely never actually be in that situation. However, for outdoor enthusiasts, it’s a legitimate fear, especially during activities such as rock climbing.

The phrase became too real for one man, who found himself literally stuck in just that predicament — a rock and a hard place. Aron Ralston was climbing through Bluejohn Canyon in Utah, alone, when a small boulder fell and pinned his arm against the canyon wall. He carried a small rucksack, which only contained a single liter of water, some pieces of chocolate and two burritos.

Perhaps the most foolish part of his trip was that he never told anyone where he was going. Rule #1 is to always tell someone where you’ll be and when you plan to return. This will enable others to know where your last potential location was if you don’t come back.

Ralston spent 127 hours trapped under the boulder in the canyon until he finally came to a realization, which he credits to rage rather than logic: He would need to cut off his arm using a cheap and dull knife found on his multitool.

He realized he could fling himself into the boulder and break his bones, which is exactly what he did. After the excruciating break, Aron began cutting, continuing for an hour to get through his arm. He then went on to scale 65 feet to exit the canyon, where Dutch tourists helped him along until rescue crews arrived via helicopter.

Aron made the vital mistake of not telling anyone where he was going, which could have led to him being rescued much sooner. The events that took place have since been depicted in Danny Boyle’s film 127 Hours. If anyone knows anything about being stuck between a rock and a hard place, it’s Aron Ralston.

Do you know of any strange or miraculous survival stories? If so, reply to your email and share them, we would love to hear from you!