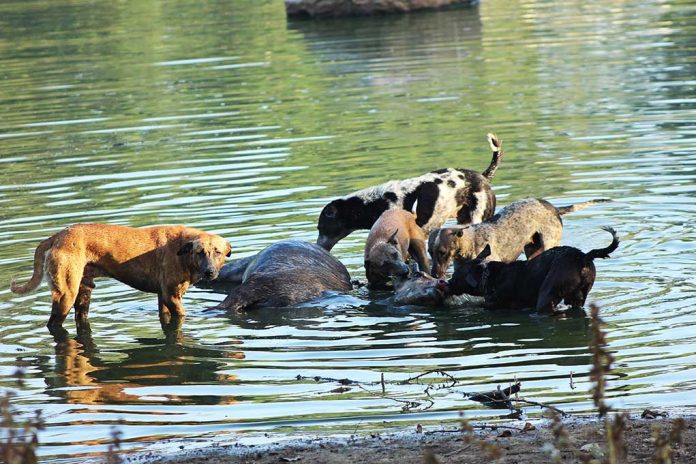 (TacticalNews.com) – Dogs are man’s best friend, but what happens when we take “man” out of the equation? The results can be shocking.

After a large-scale disaster, such as a nuclear war or electromagnetic pulse attack, many people are likely to turn their animals loose. While a mass release may not seem like a problem, it’s already become one without the large-scale disaster. Around the world dogs are responsible for killing livestock, and even people, as they form feral packs.

The US alone has over 75 million dogs, with only three-fourths of them domesticated. However, as mentioned before, many of these dogs will become feral, posing serious risks to other humans.

Feral dog packs work just like wolf packs, as dogs are instinctively pack animals. Without humans to care for them, these animals have no choice but to turn wild — and they’ll do whatever they have to in order to survive. Make no mistake; they will hunt humans. Some already have.

We all must prepare to protect ourselves from these potentially vicious animals. Remember that surviving a pack of canines is a lot like surviving a pack of wolves. Keep in mind that some dog breeds, such as German shepherds and Dobermans, have a higher pain tolerance than wolves and may require more effort to fend off.

Did you know domesticated dogs will revert back to a pack mentality in the wild? Reply to your email and share your thoughts, we would love to hear from you!