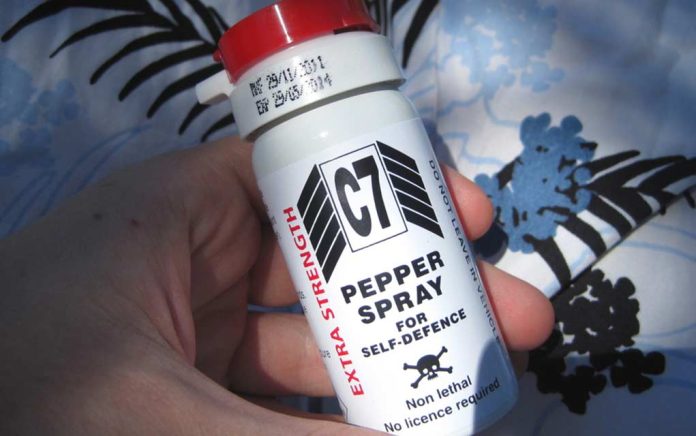 Note to readers: this article describes weapons that are not designed or intended to kill, but that does not mean it is impossible for them to be used to take a life. Hence the term “less-than-lethal,” not “non-lethal.” Also, before purchasing or even making any weapon, check with local authorities to ensure they are permitted in the specific jurisdiction where they might be housed or used.

Most of us have probably said at one time or another that if someone ever tried to harm us or our loved ones, we would take their life, no questions asked. But the reality of taking the life of another living being is very different… just ask any veteran tortured by PTSD.

Your true goal is to protect yourself, loved ones and property, which means stopping the criminal without necessarily taking their life. And for that, there are plenty of personal protection options.

(TacticalNews.com) – This category includes both pepper spray (a.k.a. OC-spray) and tear gas (a.k.a. CS-gas). They are not the same thing and each one affects the body differently. The general idea for either spray is to disperse a cloud of particulates that will affect an attacker’s ability to see and breathe and, therefore, hinder them in their ability to carry out an assault.

One thing to note about these types of weapons is that they are best used outside. Why? Because when those particles become airborne, they also have the potential to affect you because they are in a contained area. The spray could even be pulled through your heating and cooling system which would spread it to every room in your home.

Outside, the particles are more likely to be carried away from you and dispersed into the air, where they eventually become diluted by the atmosphere itself. In either scenario, chemical sprays can deter an attacker. Keep in mind that they also have the ability to temporarily impair you and others around you as well.

Electric shock weapons are used to disrupt the body’s nervous system long enough to incapacitate the assailant. There are two different types, with plenty of variety within them. While the term “taser” is actually a trademarked name, it’s also used to describe any weapon that delivers an electrical shock via probes that are launched from the weapon itself. Stun guns are weapons that have probes on them which must make contact with the body in order to deliver an electrical shock.

The overall idea is to cause random muscle spasm to temporarily deprive the target control over their body movements. Unlike chemical sprays, these weapons pose no risk to you unless the assailant gains control of them or you misuse them.

To that end, the less well-versed you are in close quarters combat, the more range your weapon should have. For example, a 110 lb. woman with no self-defense training is better off with the pistol-like version because she has a higher risk of someone being able to disarm her. Since she can effectively use a taser before the assailant is ever within arms reach, she’s more likely to successfully evade the attack.

As the name suggests, this involves shooting or launching something at a threat from a fair distance. Something as simple as a slingshot can be effective with practice. On the other end of the spectrum, there are alternative-loaded shotgun shells that use salt, beanbags, or rubber balls to deter assailants.

Even paintball guns can be used for a limited form of defense, depending on what they are loaded with. A standard paintball stings on contact and can leave a welt but is unlikely to stop a determined attacker… It’s really the ammunition itself that makes the difference here. A quick internet search will turn up several places selling balls that, instead of paint, are filled with powdered pepper. These burst on contact – but, rather than a splash of vivid yellow, a cloud of hot pepper dust explodes and is inhaled by the adversary.

Even a bow and arrow can be non-lethal while still stopping an assailant in their tracks. Nothing quite says “Whoa there buddy, let me slow you down real quick” like an arrow in the thigh.

While nobody wants trouble, it can pop up anytime, anywhere, and being prepared is vital. Whether it’s a mugger or a mob after a disaster, natural or manmade, there are tools available to protect oneself while limiting the risk of taking a life. After all, even professionals in the military and police forces can succumb to heavy guilt after the death of an assailant on their watch. This way, another’s stupidity doesn’t become a life-long burden to a potential victim.