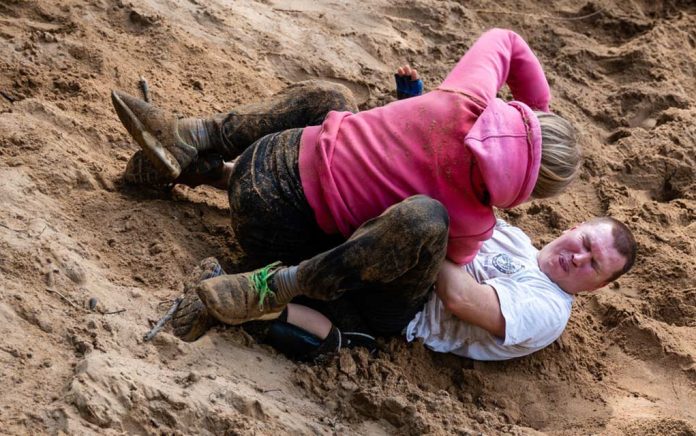 (TacticalNews.com) – Finding yourself in a street fight is always a dangerous situation, but when you’re facing off against a much larger opponent, things get much more complicated. Not only are they likely to have a reach advantage, chances are that they’re going to be stronger than you as well. In this event, size does matter.

So what can you do to defend yourself from the angry giant bearing down on you? We’re about to show you!

The best option is to avoid the fight altogether. If you can talk the person down and make peace, you won’t have to resort to violence. This will keep everyone involved safe from harm. You may have to swallow your pride to do this, but staying out of a brawl is a win in the long run. Try some of these de-escalation techniques:

Staying safe and suffering a wounded ego is better than getting in a fight and suffering real injuries. Using these techniques might also give your opponent a glimpse into a new way of handling things and it wouldn’t be unheard of for them to try and befriend you afterward.

Be Mindful of the Environment

The area you’re in is going to have an impact on the fight; try to get to an area clear of items that could add to any potential injuries. Being thrown onto a table, a bar, or a chair is going to be unpleasant. If you can get your opponent to move away from such obstacles, it’ll also reduce his or her chance to grab a weapon.

At the same time, you can make your environment work to your advantage. Smaller people tend to be able to move faster than larger people, so open spaces are more advantageous for you than them.

Keep moving if you can; a larger opponent uses more energy to move and thus will tire out faster. Wear them out by dodging attacks and making them chase you around. Eventually, they’ll become winded, at which point you can either make your escape or turn the tide in your favor.

On your feet  – We can’t stress this enough, stay out of range. Throw kicks, use impromptu weapons (chairs, bottles, anything that you find lying around), whatever you can do to deal damage without getting hit back. Your legs are likely to be longer than their arms, so you can kick without being within arms reach of them.

Regardless of size, every person has the same weak spots: sensory organs, such as the nose and eyes, are good targets that’ll make the eyes water and distort vision. A good punch or slap to the ear can crush your opponent’s equilibrium. The groin is another obvious target — striking here will disable just about anyone.

But how do you hit their pressure points while staying out of reach? This is where your environment comes in handy. Sand or even a liquid in the eyes is going to slow an opponent down. This is also where you can use your height to your advantage and aim low. Sweep the feet or throw a kick to the side of the knee.

In a grapple – If you have to wrestle with your adversary, don’t try to out-power them. Joint manipulation will get you farther here than a bear hug will. Grab a finger and wrench it in the wrong direction as hard as you can. Any small joint that you can turn the wrong way will cause a great deal of pain. A finger in the eye or throat will also slow them down and maybe even force them to let go of you as they reach for their injured area.

As we stated before, there are no rules in a street fight. You’re going to have to out-violence your opponent and this may include eye-gouging or even biting them.

Knowing pressure points on the human body can also be of great use here. There’re a large number of places you can squeeze or stab with your thumb that will cause intense pain to a person. Knowing where key nerves are and how to manipulate them can make anyone let go of you.

Head locking the neck, jaw, or nose and applying pressure is enough to stop nearly anyone in their tracks. More advanced pressure point techniques are best learned from a licensed instructor and can be difficult to use in a real-world scenario.