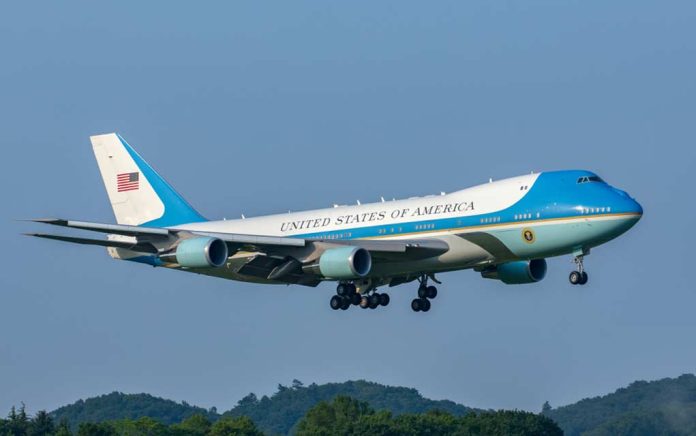 (TacticalNews.com) – Air Force One is likely one of the heaviest defended planes on the planet. However, this doesn’t mean that it’s invincible in fact, the amount of force it would take to bring the bird down is not much more than your average jetliner, which is why this incident has drawn concern.

The Air Force's 89th Airlift Wing is reviewing a report after people traveling aboard Air Force One on Sunday saw an object that appeared to be a drone as the plane was landing at Joint Base Andrews outside Washington https://t.co/NJVgJIVcgY

On Air Force One’s approach to an airport in Washington with President Trump in tow, the massive jet almost struck a small drone. Several witnesses aboard the plane stated that the object was shaped like a cross and was yellow and black; witnesses said the object was just off the right side of the plane.

The incident occurred just before the plane landed at the airport at 5:54 pm. The North American Aerospace Defense Command (NORAD) referred questions to the Secret Service, who didn’t immediately respond on Monday to questions to confirm the incident.

Aviation investigators find it difficult to verify these types of events, though it appears to be one of thousands of incidents involving drones in the US. This is prompting law enforcement to call homeland security agencies to increase regulations on the use of unmanned devices. A drone built for civilian use typically only weighs a few pounds and likely won’t bring down a jetliner. Government research, however, suggests that the drones could cause more damage than a similar-sized bird, which can smash a cockpit or destroy an engine.