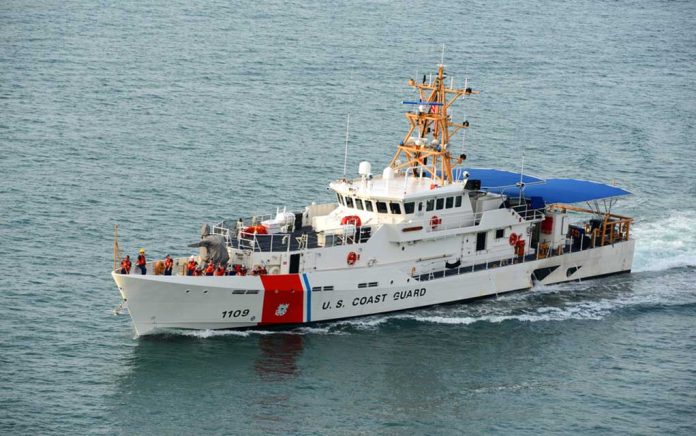 (TacticalNews.com) – We all enjoy the ability to relax after a long day of hard work. We all have our own ways of letting go and winding down. However, some people like those in the Coast Guard don’t get the luxury of having a cold beer after work, so they make the most of their situation, not expecting an unwanted visitor.

Kimball, a national security cutter, and her crew ended their long day of work on Wednesday, August 26 with a well-deserved swim in the Pacific. More than 40 crew members took part in the well-thought-out swim call, with a rescue swimmer on standby, equipped with fins and other swimming attire. However, the happy ending to a long hot day of work was cut short when the party was crashed by an eight-foot shark.

The shark, likely a longfin mako or pelagic thresher, surfaced by the ship’s rescue door and was headed in the direction of the swimmers. The Navy and Coast Guard vessels thankfully have polar bear and shark watches; because humans are not always at the top of the food chain.

Maritime Enforcement Specialist 1st Class Samuel Cintron, acquired his target and opened fire with the shark about 30 feet away from the swimmers. The shark quickly changed its course but did readjust and head back towards the swimmers, who were now heading for the smaller boat, the ship’s boat launch, and the Jacob’s ladder. Cintron once again with great accuracy opened fire and diverted the shark; a spokesman for the Coast Guard stated that the shark seemed to be unharmed after the encounter.

This proves it pays to be prepared, even if it seems unlikely that something is going to happen.