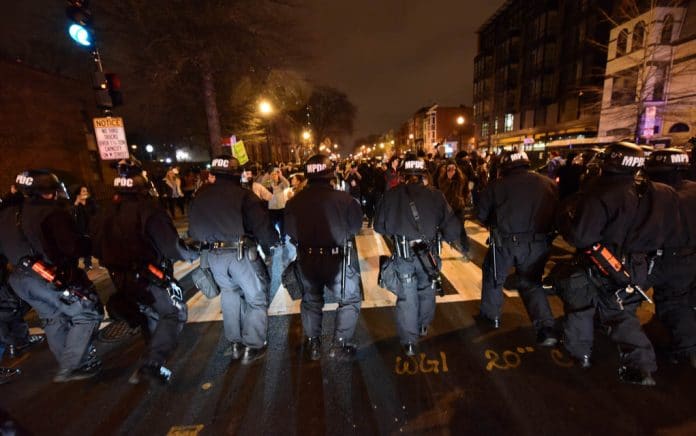 (TacticalNews.com) – Americans all across the country sat in front of their televisions, devices and computers on election night. Neither Democrat nor Republican had a clear picture of who might win — and frankly, that much still isn’t clear as of November 4th at 5:00 p.m. EST. Most officials believe we won’t have a clear answer until at least Friday, if not afterward.

What is clear at the current time, however, is the fact that Americans are more fired up about this election than ever before. Voters showed up to cast their ballots, whether by mail or in person, in record numbers, and unruly protests were already well underway on election night.

The LAPD was forced to declare an unlawful assembly relatively early on election night, after a group of armed individuals dressed in all black melded with a second group of citizens leaving a vote rally. It wasn’t immediately clear whether this was ANTIFA, or simply opportunists.

Protests also unfolded in other cities at the same time. Both Washington, DC, and Raleigh, NC, were forced to confront several groups of violent demonstrators throughout the course of the evening. Tempers also flared in isolated pockets throughout Portland, Oregon, shortly after the FBI warned of the potential for violence earlier in the day.

If the rioting should become worse, or even move into your area of the woods, are you ready to keep them out? See Modern Survival’s helpful security tips for preppers for more info.