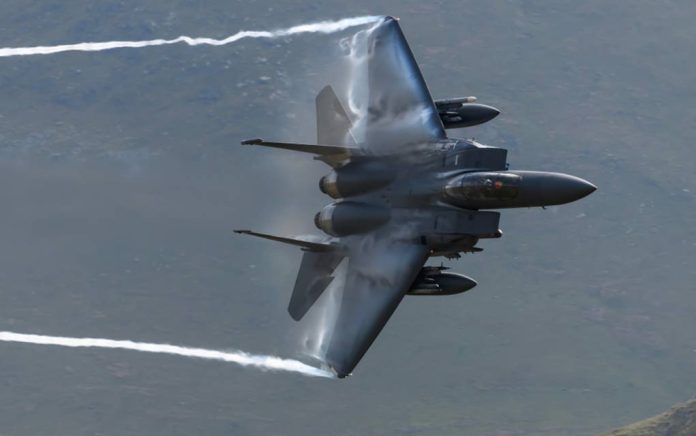 (TacticalNews.com) – The US and the UK recently teamed up to locate an American aircraft that crash-landed in the ocean off the coast of the United Kingdom. Helicopters and lifeboats were deployed as UK search and rescue authorities hunted for a downed F-15C Eagle and its pilot. Coast Guard officials released a statement saying they had received reports that the plane went down in the North Sea about 74 nautical miles from Flamborough Head on the Yorkshire coast.

"Search and Rescue effort are currently under way, but the pilot and of the aircraft is still missing. We will provide updates as they become available, while prioritizing respect and consideration for the pilot's family." – Col. Will Marshallhttps://t.co/bJ8LHnY4ad pic.twitter.com/d5u1l6f2iu

The crash occurred at 9:40 AM after the fighter was on a routine training mission out of the Royal Air Force (RAF) Lakenheath base. The F-15 crashed into the North Sea. Neither the status of the pilot nor the cause of the crash were known at the time of the crash.

Hours after the plane had crashed, search and rescue crews found the down aircraft, but no sign of the pilot. Shortly after the recovery of the aircraft, unfortunate news came to fruition.

The pilot of the downed F-15C Eagle from the 48th Fighter Wing has been located, and confirmed deceased.

This is a tragic loss for the 48th Fighter Wing community, and our deepest condolences go out to the pilot's family and the 493rd Fighter Squadron.https://t.co/GwCWFwImaS

The remains of the pilot were found, and he was confirmed to be deceased. RAF Lakenheath released a statement that the pilot’s identity would not be released until all next of kin were informed.

The cause of the crash has still not been identified, though the USAF has been looking to retire the F-15Cs. Last May, the then-Air Force Secretary Heather Wilson stated there were already issues with the airframe.

This is a tragic loss. Our deepest condolences go out to the pilot’s family, friends, and colleagues in the 48th Fighter Wing community and the 493rd Fighter Squadron.