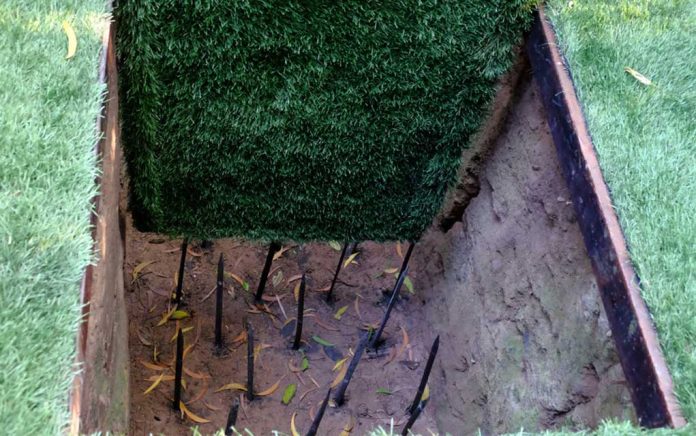 (TacticalNews.com) – During the Vietnam War, which was fought from November 1, 1955, until the fall of Saigon on April 30, 1975, most of the fighting occurred deep in the jungles. On this terrain, the Viet Cong perfected the art of low-tech booby traps.

One of the most notorious weapons of the war, booby traps were a commonplace threat to American troops. Of all the traps the Viet Cong deployed, punji stakes — also called punji pits — were some of the most effective. Originally designed to catch game animals for food, the punji pit proved horrifically effective against US soldiers.

Tactical News does not endorse the use of booby traps against other human beings, nor do we recommend anyone place these on their property as they are extremely dangerous. The following information is presented for educational purposes only.

A Vietnamese punji pit was constructed by digging a deep hole in the ground, then stabbing sharpened bamboo into the ground at the bottom. The top of the trap was then covered in loose sticks and shrubbery to conceal it. When something stepped onto the covering, the weight broke it, causing the victim to fall into the hole and become impaled.

Often, the sides of the pit were also lined with downward-facing spikes, to cause additional damage as the victim is pulled out of the trap. To make the pitfall even more dangerous, the spikes were often covered in poisons, or even feces, to ensure the wounds would become infected.

When used in warfare, the punji pit was not designed to kill its victim outright, but rather to maim them and cause attrition to enemy forces. When a soldier stepped into one, he required help to get out and then immediate medical attention. In Vietnam, this would require evacuation by a helicopter, costing the United States valuable resources to save the wounded soldier.

Not only did these traps cause severe damage to the victim, but also instilled demoralizing fear into soldiers. The stress of constantly worrying about setting off a booby trap led to mental and physical fatigue in the American forces.

The Viet Cong weren’t the only ones to use unconventional weapons in battle during the Vietnam War. To see a shocking bomb the United States dropped on North Korea, check out this article on Modern Survival.

Did you know about punji pits before reading this article? Do you know of other boy traps that have been used in times of war to demoralize and disrupt troops? Reply to your email and share your thoughts, we would love to hear from you!