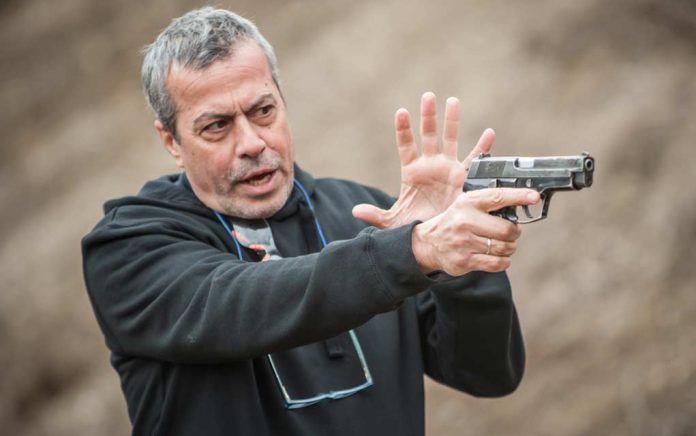 (TacticalNews.com) – It doesn’t matter how good your weapons are if you can’t use them effectively – and there’s a lot more to that than punching holes in the ten-ring from a nice comfortable stance at your local range. If you expect your guns to keep you alive in a survival situation, you need to practice using them the way you will when your life depends on it. Here are five drills you should include in your weapon training:

Under pressure, you’re going to instinctively shoot with your dominant hand. That’s not a problem, because you’ll aim better and be able to operate the weapon’s controls more effectively – until your dominant arm is injured. You need to be able to use your weak hand, too.

Practice shooting with your weak hand from a variety of positions. Once you’re comfortable with the basics, move on to changing magazines and clearing stoppages with the weapon in your weak hand. Finally, practice techniques for doing these tasks with only the weak hand – and yes, it’s possible.

Moving in a high-threat environment isn’t easy. You need to make sure that when someone’s moving there’s always another person ready to cover them with aimed fire, and that’s a skill you need to practice. You’ll need a range at least 25 yards wide and 100 yards long. You can practice with two people, but more than one team of partners is better.

The drill is simple. One team moves down each side of the range. The one on the left moves first, while the team the right covers them by firing at the targets on their side of the range. Once the left team has gone about ten yards, they stop, take up a fire position and open fire. The right team then moves up so they are level with them. When they open fire, the left team moves again. Repeat until you’re within five or ten yards of the target.

Safety is essential during this drill. Both teams should fire only at targets on their lane; no cross-range firing should happen. Any time anyone moves, the safety should be on, finger off the trigger, with the muzzle pointed safely downward. Be aware of muzzle sweep, too – and fight the instinct for the two teams to close up on each other.

Brain in a Box

To effectively drop an attacker, you can’t just shoot in the general area of their head; you need to disable the brain. Simulate that, and practice hitting center target, with a small cardboard box about the size of a human head. Cut a hole a couple of inches across in one side of the box. Hang a balloon through the hole, blow it up to the size of a large grapefruit and tie it off. Now you can suspend the box by the neck of the balloon.

Hits on the box that miss the balloon won’t have much effect – but if you hit the balloon, it will burst, and the box will fall. This is a very visible way to know when you’ve got the shot placement right.

Build a barricade from half-inch plywood with timber supports. It should be around four feet wide and six feet high. Create a small staircase with four steps, each step about a foot high, and fix it to the back of the barricade. Cut two firing ports in the barricade, each being ten inches wide and five high. Put one low, for shooting from the prone position, and the other higher, for the kneeling position.

This barricade gives you a total of eight fire positions: From each of the steps, through each of the firing ports and round each side. It’s a good way to practice the sort of fire positions you’ll find in urban areas, and let you quickly transition between them.

You might need to engage multiple threats rapidly – a South American bodyguard had to do this, and the famous El Presidente drill is named in his honor. You’ll need six targets placed four or five feet apart, your pistol and two magazines loaded with eleven rounds each. Start ten yards from the target with the pistol holstered. On a signal, draw the pistol and, starting at one end of the line of targets, double-tap each one. You’ll have one round left for the last target. When the slide locks back reload, engage that target with a second round, then work back along the line double-tapping each target again. This is a timed shoot and you should be looking to put 22 rounds on target in less than 15 seconds.

These drills are designed to simulate real-world scenarios; going far beyond standard target practice. Safety is always a top priority when handling a firearm in any situation, but due to the nature of these exercises, we urge extra caution to be taken when training with them.