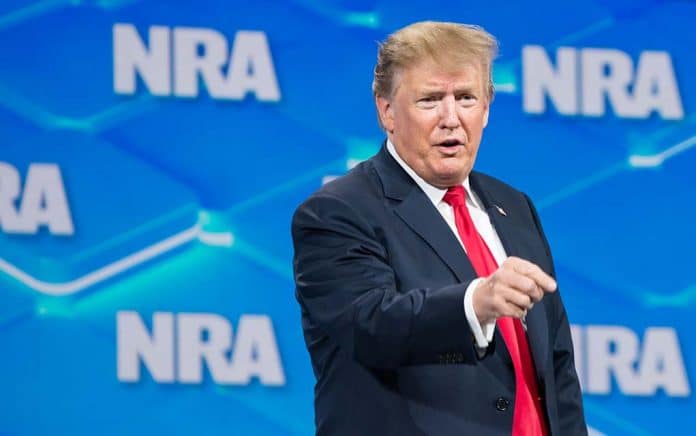 (TacticalNews.com) – Recently, President Donald Trump praised NRA members during an extremely powerful interview. The president also solidified his stance on the Second Amendment and predicted what may happen if his opponent Joe Biden won the upcoming presidential election.

President Trump has been a strong ally for gun rights activists and the Second Amendment throughout his term in office. The president spoke firmly and politely during the interview with Frank Miniter, Editor in Chief of the NRA. He stated that he would never waiver, and he will always stand up for the Second Amendment. When asked about the country’s need for a law and order president, President Trump forcefully declared Democrats disregard law enforcement, something he believes the American people don’t support.

Miniter asked President Trump how his agenda stood in contrast to Biden’s 11 pages of bullet-pointed bans, regulations, and firearms restrictions. The president replied he supports the American people’s freedom, freedoms Joe Biden wants to take away. The President added Biden would destroy our beloved Second Amendment.

When asked if he would support a reciprocity act nationally allowing law-abiding gun owners to travel with their firearm easier, the president answered, “I will support such legislation. If it comes across my desk, I will sign it.”

At the end of the interview, President Trump stated we need the Second Amendment, and its protections won’t end on his watch. As a closing point, President Trump said he had great respect for Wayne LaPierre, the Executive Vice President of the NRA, and told Miniter to tell members of the NRA he was with them all of the way.

President Trump, who had a concealed carry permit during his time in New York, is a strong supporter of our Second Amendment. His opponent, however, is not. Check out Biden’s plan “to end gun violence,” which looks more like the destruction of the Second Amendment than a means or reducing gun-related crime.